Most people are a poor judge of wind speed, and its effects on a walker. Know your limits, says Helen Howe. Here are her tips for safer walking in the wind…

With storm after storm making its presence felt across the UK this winter, many mountain goers have got into trouble and had to call for rescue. The storm that periodically erupts on social media would make Storm Ciara fade into insignificance, as armchair warriors call for compulsory insurance, charging for rescues, naming and shaming and the like. As a rescuer who was out in Storm Ciara, among many others, I can safely say that those caught out recently just had no idea what a 70mph wind feels like. Do you?

Winds are a feature of the British hills year-round. But though we can, of course, get strong winds in the summer months, the UK experiences more low-pressure systems over the winter. British winter and gales go hand in hand.

Up in the hills, winds can be particularly hazardous. Some of the hazards include:

So why do people get caught out?

On Sunday morning at the height of the recent Storm Ciara when both the BBC and Met Office was forecasting wind speeds of 78mph, I went out for an hour to walk my dogs in an exposed location near my village. 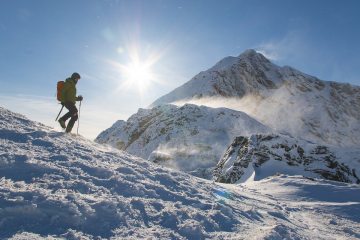 At no point during that time did the winds reach speeds of 78mph in my location. While I was out the wind speeds averaged 30-40mph. How do I know? Well through long experience, I know what a given wind speed actually feels like. At 30-40mph I get blown sideways and can take evasive action. At 45-50mph I get blown off my feet. Higher up the mountains, the wind would have been reaching the forecast speeds, and a lot more frequently, but down in the valleys where these speeds had been forecast, they didn’t. It seems likely that people without wind knowledge would assume they had been experiencing 78mph winds, as forecast, and wondered what the big deal was since they weren’t being blown over. As a result, some could then venture into the hills, not realising that they have yet to feel winds anything like that strong.

Here’s a recent group experiencing strong winds on Drum. For the record, they estimate the wind speed at ‘only’ 40mph…

Ciara and Desmond were not the first storms to come with a heavy side order of media sensationalism; almost any significant storm gets a name to ramp up its importance and becomes the subject of frenzied media attention. Many of these storms turn out to be damp squibs, but if the media has been trumpeting alarming wind speeds in the build-up then they are unlikely to correct the mistake after the event. If people believed the hype then they could be apt in future to underestimate the effects of a given wind speed.

So you want to go out in the wind and have some fun? Here are some tips to help you stay within your limits and manage your time out there better.

1) Know the effect of wind speeds on humans:

Never mind the higher numbers – you can see that normal walking is already being affected at only around 20mph!

Know what your limitations are. Smaller people will obviously be affected at lower speeds than heavier people. When I was checking wind speeds using an anemometer in the Cairngorms on a Winter Skills course, the highest gust we recorded was 55 mph. Any faster and even the heavier guys were being blown over.

It’s worth noting that walking in gusting wind is harder than walking in a constant wind. For example, a constant 40mph wind is hard work but you can brace against it.On the other hand a 30mph wind with 40mph gusts is more likely to blow you off balance as the gusts may catch you out unexpectedly.

2) Techniques for walking in the wind

3) Know the effect of terrain and altitude on the wind

Winds at UK summit altitudes are often two or three times stronger than at sea level. Sometimes on high upland plateaus such as the Cairngorms, this effect can be even more marked.

Cols, bwlchs and bealachs such as the aptly named Windy Gap between Great and Green Gable in the Lake District funnel winds and so can be subject to higher wind strengths than the slopes on either side.

Valleys running the same direction as the wind can also funnel and strengthen winds so these can sometimes have higher wind speeds than higher up.

4) Route choice is everything

Even on a very windy day, some routes may still be possible. But you do need to take the wind direction into account. One route up a mountain may be totally exposed while another is sheltered almost all the way to the summit. For example, with a south-westerly wind (i.e. coming from the south-west) the Pyg Track and Miner’s paths on Snowdon can be quite sheltered until they meet with the Llanberis path on the ridge. Having said that, there may still be some strong gusts due to eddying.

It hardly needs to be said; avoid exposed ridges such as Bwlch Main and Crib Goch.

Also avoid rocky mountain tops such as the Glyderau as it is easy to be buffeted and blown around and end up twisting or breaking an ankle in between rocks. If I have to go out on a rescue to a rocky location in strong winds I will wear a helmet to at least protect my head; most blown-over rescue casualties I go to in windy conditions have a head injury. Wide grassy ridges may be more exposed but at least it is a soft landing!

Remember though, that in winter conditions the sheltered lee slopes may also be where all the snow has been blown to, creating the risk of windslab avalanche.

How wind chill is calculated

Make sure that anything you may need in a hurry is easily accessible. For example, carry your gloves in your pockets or top lid of the rucksack rather than deep in your pack.

Keep snacks in your pockets rather than buried. Sometimes once on a ridge, there may be no shelter for several hours (especially in winter when the sheltered ledges and slopes may be corniced or have windslab build up) and it may be too windy to stop on the ridge, so you want your food handy.

In strong winds, it is easy to lose equipment. Gloves blow away, and maps are easily lost. It is worth getting gloves with wrist loops (or sew elastic wrist loops on for yourself as I did with some of my old Dachstein mitts). Have spares of everything: at least two if not three pairs of gloves, two hats, two compasses, two paper maps and a technical back up (GPS devices and phones blow away less readily than paper). Although map cases keep the map attached to your body, they can act as excellent garrottes and in strong winds anything flapping around can be a definite inconvenience and at worst, a danger, catching your eyes! Small maps (extracts from maps) which fit in your pocket are safer and handier.

Keep your compass attached to your person.

Make sure anything which can flap is tied down and secured eg. long rucksack straps’.

Consider wearing a helmet if you’re out on rocky ground. Many wind-related casualties receive head injuries.

Wear wind proofs and/or waterproofs and take plenty of insulating layers. Windchill does as it says on the tin: It chills! Looking at the graph below you can see that a 20mph wind at 0 degrees takes the effective temperature well below freezing.

Exposed flesh can freeze in minutes in the wind chill. Take plenty of gloves to keep your hands covered and warm.

7) Navigation in the wind

Navigating in the wind can be more difficult, for a number of reasons:

Finally, be aware that very intense low-pressure systems can move faster than forecast and arrive early. Factor this into your plans for the day with escape routes and timings.

You needn’t always let a windy forecast stop you heading out and enjoying the hills. But above all know your limitations in the wind, how to plan for it, and when to turn back.